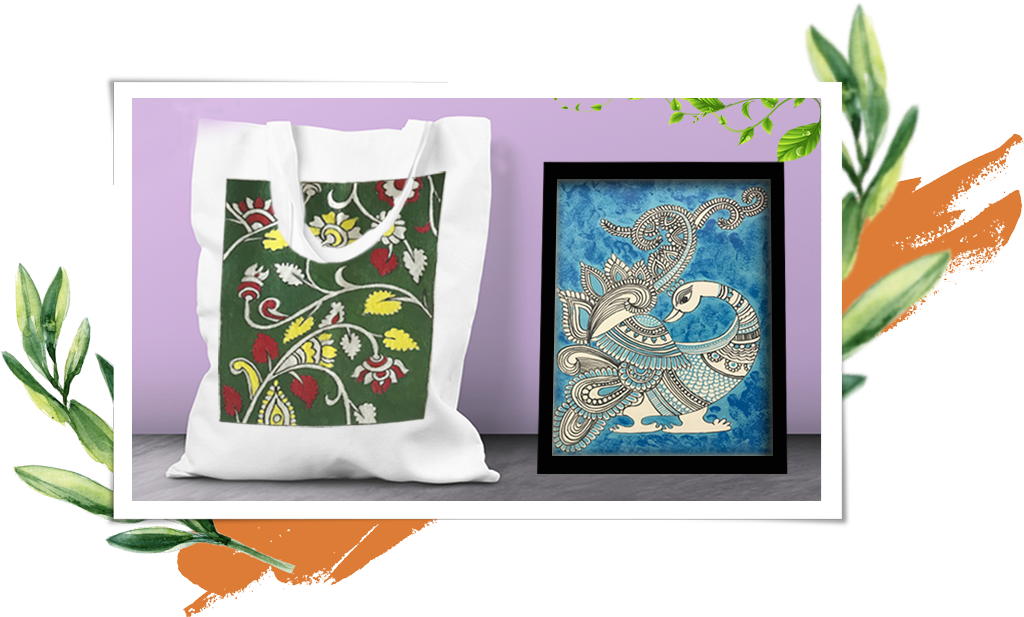 In ancient India, folk-singers wandered from one village to another, narrating stories from the epics, in ballads and songs, to the village folk. In course of time, this tradition of story-telling changed its medium to cloth and canvas paintings and thus was born the beautiful art form of Kalamkari – in the villages of SriKalahasti and Masulipatnam, both in present-day Andhra Pradesh. This 3000 years-old art form thus has two distinct styles, named after the two villages of its origin - the Srikalahasti style , developed in the temples and focused on themes of Indian epics of Ramayana and Mahabharata, images of gods and goddesses; and the Masulipatnam style - influenced by Persian motifs and designs.
Kalamkari Painting traditionally uses earthy colours like indigo, mustard, rust, black and green, with bold outlines, using natural dyes. For instance, craftsmen extracted black colour by blending jaggery, water and iron fillings which they used for outline of the sketches ; while mustard and yellow were derived from boiling pomegranate peels; red hues were created from barks of Maddar or Algirin; likewise blue was obtained from indigo and green was obtained by mixing blue and yellow together. The artists who worked on the Kalamkari painting scrolls were known as Jadu Patuas or Duari Patuas, loosely translated as magical painters.